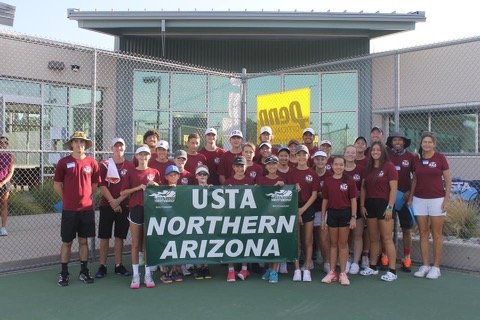 12 and under team made up of

This 12 and under team came away as the champions of their age group. This was unexpected but they played hard and won the overall competition by 5 games in the end. The 14 and under team fought hard, they made new friendships and worked as a team. This team was also given the sportsmanship award by two other teams in the competition.

The 18s intermediate team played hard also this was the most diverse team out of the 4 northern Arizona teams with players from all over NAZ and one from Phoenix. This team played great and ended up taking 2nd place in the competition.

18s advanced team was very exciting to watch. There was some fierce competition and our team had minimum number of players of 3 boys and 3 girls which made playing at the highest level very difficult. The team did well winning one of their overall matches and fought hard for every game.

Thank you to all the coaches that helped out to make this experience great for the players. Coaches – Sterling Fetty, Jake Worseldine, Andrea Meyer, and Kyle Bloomstadt.